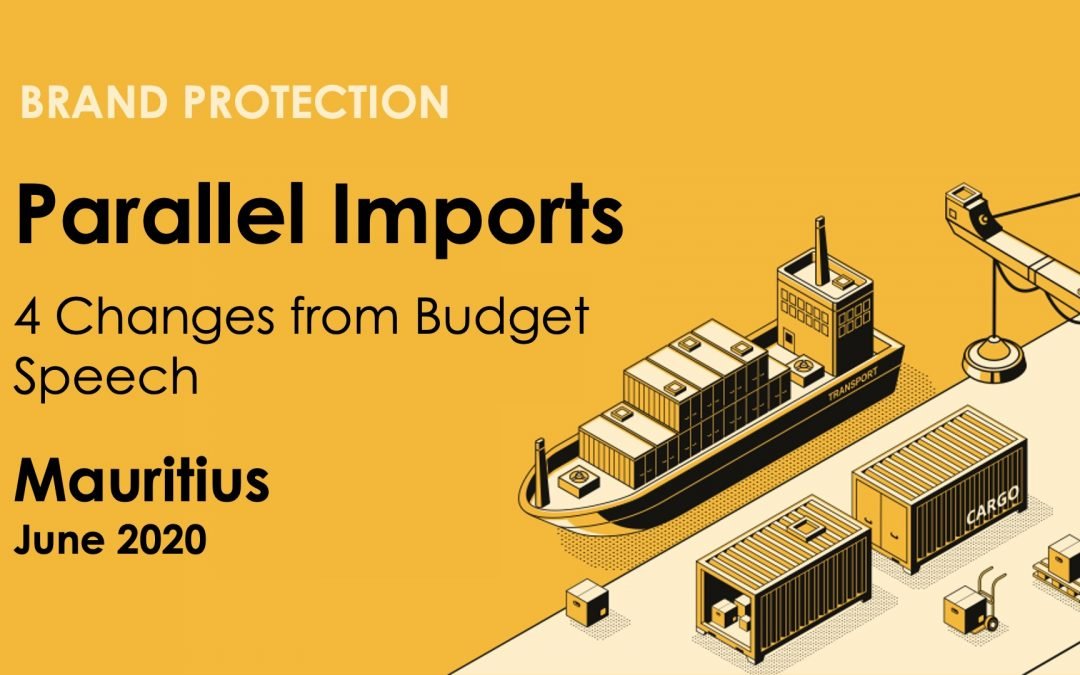 The Budget speech was delivered by the Hon. Minister of Finance on 4th June 2020 and it includes certain changes to be made to the trademark monitoring and border control process for trademark protection in Mauritius.

As matters stood before budget, a brand owner could:

1. Register its brand at customs for protection against imports which were counterfeit and it could also stop parallel imports.

2. Once registered, customs would normally notify the public of such brand protection registrations on its web site.

3. De minimis (small quantities) import of non-commercial nature, intended for personal use, sent in small consignments or contained in the luggage of a passenger or crew was exempt from the enforcement system. But in practice, Customs has been seen to control everything when there was brand protection in place.

4.  Once registered, Customs would take action to stop imports at customs or even take actions inland against infringement of brands.

A.  An obligation to provide public notice:

1.  There is now an obligation for Customs to give public notice of any registration (which would formally mean publication in our Government Gazette generally and probably on its web site).

2. There is a further obligation to give public notice all detentions made by Customs in future.

B. A limitation of action on Parallel Imports:

3. Provided the goods imported are genuine, customs is not going to stop goods imported for personal use in small non-commercial quantities or are in the luggage of a passenger, or crew.

4. When a new trademark is registered for protection at customs, any genuine (but parallel import) consignment which had already been shipped before the public notice of such registration is made, will not be stopped, as long as it reaches Mauritius within 1 year of the date of the public notice.

5. When a new trademark is registered for protection at customs, any existing genuine goods already in bonded warehouse or had already been manufactured for home-consumption / export prior to the public notice will not be affected.

C.  An obligation to take action.

6. There is a new provision which pushes right holders to take action or otherwise customs is required to stop enforcement of the registered brand! – and this is stated verbatim as follows:

“Where MRA Customs suspends the clearance of imported goods or detains goods on the local market on grounds of suspected infringement of industrial property rights but the right holder does not initiate legal proceedings for two consecutive cases during a period of 6 months, MRA Customs will not suspend/detain any similar future consignments unless and until the right holder initiates legal proceedings.”

a. It would appear that the ill which the Government is trying to cure is two-fold:

i. Firstly – that importers, traders and manufacturers are not penalized for parallel imports, until such time as they are notified that the brand is registered at customs;

ii. Secondly – that Customs stops working for those brands which have simply registered with customs without ever taking any action against the imports.

b. The two main issues which arise are the following:

i. What happens to the trademarks registered at customs now, up to the time public notice is given? Would that provide a window to potential importers intentionally or not? This will depend on the actual Finance Bill drafting and whether exemptions would be made for those.

ii. Would settlement agreements, which are not legal proceedings per se be considered by Customs and the forthcoming Finance Bill as such, or would settlements need to be made in Court from now on, increasing the costs of rights holders?

We have contacted customs for clarifications and will revert as soon as there is further information available on the above with an update.